This year the GRC SGWC moved to Wiltshire,
at Alton Barnes near Marlborough, by kind permission of
Mr C Cutforth and the Shaw Shoot and by invitation
of Jerry Shutter.
There was some delay in advertising the day,
as although the ground for the shoot was ideal, the only water
immediately accessible was a picturesque stretch of the Kennet
and Avon Canal. Obviously the canal banks were far too steep
for the ‘novice’ show dogs to attempt a water retrieve and there
might have been the added hazard of boats. Wendy Andrews (Catcombe)
who picks up on the shoot, kindly approached a local landowner,
Bruce Gauntlet and obtained permission for us to use his purpose
built pond, which is also used by the BASC for training days.
The judges were as usual our very own Field
Trial Secretary Gwen Knox and for the first time this year, Working
Test Secretary Bob Hargrave. The day attracted a very good entry
of 16 dogs and we were fortunate that during a very wet spell
weather wise, we enjoyed perfect conditions throughout. We were
graced with the presence of the GRC president John Tiranti who
also presented a beautifully carved stick to be raffled – this
was fittingly won by Mary Neil who had travelled with Fiona Brightley
from Scotland to take part.
Jerry’s superb team of beaters and guns meant
that enough birds (pheasant and partridge) were provided on the
very first drive, for the majority of the dogs to complete (or
attempt) two retrieves. Two dogs sufficiently impressed the judges
on just one retrieve.
We then had to drive in convoy 11 miles to
the water, fortunately everyone managed to stay in touch! Not
only was the pond superb, there was a summer house overlooking
the water, so everyone had a grandstand view and refreshments
were served from there.


I am delighted to say, all 10 of the entered
Goldens passed.
The successful dogs were:
MOLOKO MCADOO, owned bred and handled by
Mary Neil

XANTHOS ZINQ WITH GAYTONWOOD, owned by Mr A W & Mrs D E Rose
and handled by Dawn Rose – one of the youngest Goldens in memory
to pass, at one day under 10 months old

KELVERQUEST EYE OF THE STORM, owned bred and handled by Julie
Randall
The successful Flatcoats were:
YONSAFF RAMBLER FOR CLEOVINE owned by Mrs
J A Showell and handled by Mr D W Showell, who also retrieved
any straying dummies from the water


The BASC Team Challenge 2007 took place at
Sherbourne Castle and uses the same ground as the old International
competition before it moved. As per normal for a Bank Holiday
Monday the weather when we got to the show ground was wet and
cold. Someone remarked that they were warmer during the picking
up season!

In the GRC team were team captain Richard Ashdown
and Mistybrook Connor , Mike Knox with Tauvechan Minstrel, Sally
Crossland with Castlemans For Your Eyes Only and Simon Fowler
with Cainhoe Chapel Down. The team was very kindly sponsored by
Vitalin who supplied the very fetching shirts and caps that you
see below.

The format was four tests in the morning and
then two of the four dogs to compete in a test in front of the
crowd after lunch. Judges for the day were Mr Robert Atkinson,
Ms Sally Jenkins, Mr Basil Smith and Mr Adrian Verinder.

Test one was a mark to shot in thick bracken
and a blind with a shot from the same gun on the hill side. All
looked reasonably easy until you got to the sending point and
realised that there was a very attractive patch of branches and
scrub between the dog and the blind. The GRC team picked all the
dummies with Misty Brook Connor making the blind look incredibly
easy with a straight run to the dummy and not so much as a side
ways glance at the branches.

Test two was the most challenging test of the
morning, with a mark on a track halfway up the hill side of bracken
about 60 yards from the dog with a fence to negotiate as they
jumped into the bracken. As the dog picked the dummy and started
back a blind was put out in bracken about 50 yards further up
the hill. The dog was then sent for the blind, the bunker being
that the dogs wanted to dwell on the track where the first dummy
went out and out of the sight of the handler. There were 11 failures
on this test in total, but thankfully none in the GRC team!

Test three was a mark into a pond about 80
yards away, but the dogs couldn’t see the dummy fall into the
pond, followed by a blind on the other side of a small copse at
about 45 degrees. There were 5 failures on this test due to dogs
not believing that the dummy was in the water and refusing to
enter the water speculatively. Once again the GRC team picked
all their dummies and scored well.

Test four was a simple walk up with each dog
having to collect a mark in front and a blind behind, Sally and
her dog making it look very simple with one of only three twenties
scored by any dog on any test during the day!

The morning had been really enjoyable, with
a little gentle ribbing of each other, the other competitors and
even judges! The view of the team was that all of the morning
tests were well thought out, resulting in hard but fair tests
of dog and handler and were really enjoyable to run in.

At lunchtime it was decided that Richard and
Sally would run in the afternoon test and we adjourned to the
nearest burger bar where the skipper brought the lunch. Mike asked
me to mention that he was forced into eating the burger and would
much rather have had a green salad, honest Gwen!

The afternoon test was really there as a spectacle
for the many visitors to the show and as such was not up to the
standard of the morning tests. The test consisted of a mark to
gunfire into the lake, through some reeds and a blind in a fenced
off triangular enclosure at the edge of the lake about 30 yards
away. The dogs was sent for the mark on the water first and then
for the blind. The only real problem was getting the dog into
the enclosure, which actually made some very nice dogs look slightly
stupid which was a shame! 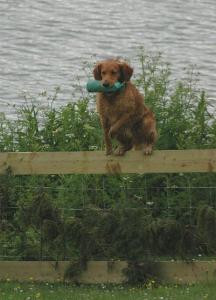 The results were announced in the main ring
after a parade of all teams and as you’ve probably guessed from
the title of this article the GRC team won with a score of 298,
from the Labrador Retriever Club of Wales on 264 with the West
Dartmoor Gundog Club on 260. The GRC team was the only one to
have no failures on any test, which just shows how testing the
course was. The top dog was FTCh Larki Style owned and run by
Mike Larkin with Mike Knox running a close second.

The day was hugely enjoyable and well organised
and I’m sure all of the team look forward to defending the title
next year, hopefully with slightly better weather!

by kind invitation of The Black Notley
Syndicate


at Checkley Wood,Cheshire
on 15th/16th October
by kind permission of Mr Ivor Beavis
& the generous support of the Guns

1st Coupar’s Piaute Pete who qualifies for
the Retriever Championship

award which he won at the GRC Championship show this year.

plenty of game to test the dogs. 15 dogs went through overnight


7 of these were lost in the third round on the second morning.